From Carrickfergus to San Francisco

Be inspired and learn from world class entrepreneur Peter Johnston at this forthcoming event at the Ulster University on the 14th March 2019. 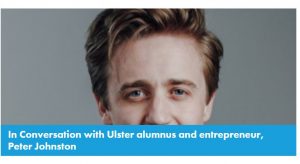 “Ulster  University alumnus Peter is Founder and CEO of Kalo, a platform enabling companies and freelancers to work together. In a previous life, Peter worked at M&C Saatchi, then as a designer at Google where he experienced the pain involved in working with networks of professionals like freelancers, agencies, and companies. He set out in 2014 to solve this huge headache, and four years later, Kalo has grown to become the leading app for managing who you work with.

Peter has been recognized in the Forbes 30under30 enterprise software category and in 2017, he made the Debretts 500 List, being named by The Telegraph as one of the most influential entrepreneurs in Britain. He is a huge proponent for gender and racial diversity in the workplace and has been published in The Guardian, Fortune Magazine, Forbes Magazine, and The Next Web. When not running Kalo, he is playing basketball and listening to hip-hop.

Peter is one of the founding members of Ormeau Baths here in Belfast and his company recently raised an $11m funding round led by Paypal co-founder and Valar Ventures to lead, Peter Thiel.” *

*Bio provided by Peter at Kalo